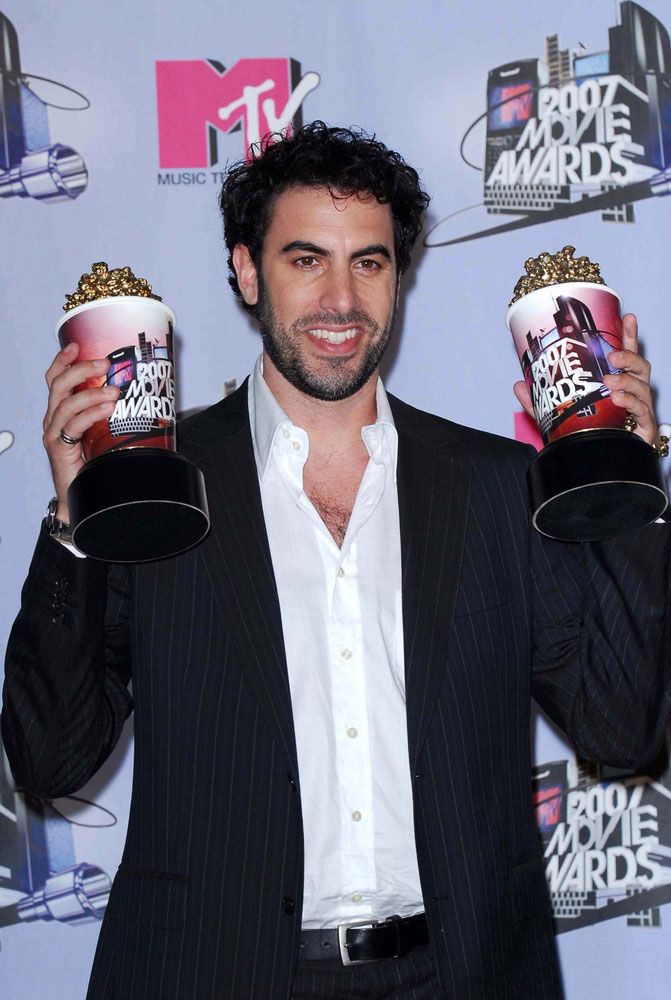 Baron Cohen was born into a devout Jewish family, and he studied history at the University of Cambridge. After deciding to pursue a career in entertainment, in 1998 he joined the television comedy series The 11 O’Clock Show, for which he created the character Ali G, a “hip-hop journalist” who was aggressively stupid. With his over-the-top attire—a brightly coloured tracksuit, tinted sunglasses, and designer skullcap—mangled English, and outlandish questions, Ali G interviewed unsuspecting actual politicians and celebrities and in the process revealed their prejudices and ignorance. His phenomenal popularity led to Da Ali G Show in 2000. Baron Cohen soon introduced two other clueless characters: Borat, a racist, anti-Semitic, homophobic, sexist Kazakh reporter, and Brüno, a gay Austrian fashion reporter. In 2001 both the show and Baron Cohen earned British Academy of Film and Television Arts (BAFTA) Awards. After making his film debut in Ali G Indahouse (2002), Baron Cohen sought new unwitting subjects, and in 2003–04 Da Ali G Show aired in the United States on the cable channel HBO.

Baron Cohen subsequently focused on his film career. Beginning in 2005, he provided the voice of the king of the lemurs in the animated Madagascar series, and he appeared as a French race-car driver opposite Will Ferrell in the comedy Talladega Nights: The Ballad of Ricky Bobby in 2006. That year, though, it was Borat: Cultural Learnings of America Make Benefit Glorious Nation of Kazakhstan, that made Baron Cohen a household name. Borat’s encounters with unsuspecting Americans as he traveled across the United States provided for outrageous and often cringe-inducing moments—a gun-store owner suggests the best gun for shooting a Jew, and several fraternity brothers wish for the return of slavery. Not everyone appreciated the humour. Several people featured in the film sued, and the government of Kazakhstan took out newspaper ads to counter the movie’s unflattering portrayal. Borat earned Baron Cohen a Golden Globe Award for best actor in a comedy as well as an Academy Award nomination for best adapted screenplay.

In 2007 Baron Cohen appeared as the victim of a homicidal barber (played by Johnny Depp) in the Tim Burton film Sweeney Todd: The Demon Barber of Fleet Street. Two years later he brought Brüno to the big screen in an eponymous feature. Baron Cohen subsequently announced that he was permanently retiring the character, as he had previously done with Borat and Ali G. In 2011 he appeared in Martin Scorsese’s family-oriented fantasy Hugo as a self-important Parisian train station agent. For his next starring vehicle, The Dictator (2012), Baron Cohen created a new comedic character—the despotic military ruler of a fictitious North African country. He subsequently portrayed the wicked Thénardier in a 2012 film adaptation of the musical Les Misérables.

Baron Cohen cowrote and starred in The Brothers Grimsby (2016), a spy comedy in which he played the hapless brother of an assassin (Mark Strong), and he portrayed the villainous Time in Alice Through the Looking Glass (2016). He then debuted the television series Who Is America? in 2018, once again creating several outlandish characters to interview unsuspecting politicians and celebrities to reveal their prejudices. The next year the comedian assumed a more serious role when he was cast as Israeli operative Eli Cohen in the TV series The Spy.

The Editors of Encyclopaedia BritannicaThis article was most recently revised and updated byAlicja Zelazko, Assistant Editor.