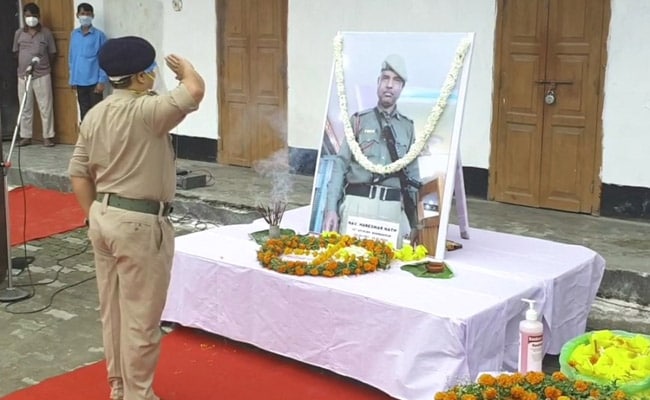 The Assam police gave a final salute today to the cop who died of the virus earlier today.

The Assam police gave a final salute on Saturday to a braveheart and an experienced cop who succumbed to COVID-19 on Friday, becoming the state’s first Corona warrior to have died of the infection.

Hareshwar Nath, a havildar with the 16 India Reserve battalion of the Assam Police, died after a sudden fall in oxygen saturation.

“For Assam Police, he is a COVID martyr. His loss has actually got us together and we take this as motivation to fight the virus, we will do our duty as expected,” Assam DGP Bhaskar Jyoti Mahanta told NDTV.

As Mr Nath, 53, was his family’s sole breadwinner, the Assam police has decided to take care of his dues.

The Assam Government had earlier announced a Rs 50 lakh insurance for COVID-19 warriors if they die in the line of duty.

“We are taking care of everything, whether our men are asymptomatic or symptomatic. Proper medical care is being rendered to them,” said Guwahati Police commissioner MP Gupta.

The cop had also been a part of the counter insurgency operations in the state.

The police force has been spreading awareness about the importance of protecting themselves from contracting the virus.

“He was a very sincere cop, a very humble and honest person. We didn’t think it was that serious but now we understand what the virus can do,” said B Bevi, a relative of Mr Nath.

Right from the onset of the pandemic, the police have been at the forefront of the battle and with the recent spike, the force has been hit badly by the virus. Till now, over four hundred Assam police personnel including officers have got infected by the coronavirus, over 900 others are quarantined. Over 90 per cent of those infected or quarantined are from Guwahati city police, a force of about 5,000 men.

A Srinagar ambulance driver is serving day and night the patients suffering from coronavirus disease (COVID-19) and have helped thousands of COVID-19 patients to not only reach the hospital but also assisted in the burial rites of COVID-19 patients who passed away from the disease. Jamil Ahmed he will continue his service as long as…

One Nation One Voice: A Song For Corona Warriors Supported

The novel coronavirus pandemic has brought us to a juncture where it feels like languishing in lockdown has become the new normal. But it has also been a moment for the world to realise the strength and solidarity that each one has exhibited against fear and uncertainty. But if the mechanisms around us are working…